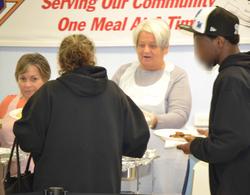 The kitchen operates from a Quonset Hut at Our Lady of Perpetual Help, 168 Grant Avenue in Seaside Heights.

Simon's Soup Kitchen is more than just "Soup". Their doors, and hearts, are open to all "In need of a hot meal, or some fellowship". Their youngest "client" has been 6-days- old and their oldest has been 102 years-old.

Seaside Heights is a summer beach community. During the off-season it serves to house individuals and families on general assistance at the various hotels and motels and winter residents. In the fall of 2012 Super Storm Sandy devastated the coast only one week after beginning operations for 2012. Due to the storm surge roughly 5' of seawater filled the Parish Hall it was during that time that Executive Director John Salemi, Sr., knew that they mission of Simon’s Soup Kitchen would be needed more now more than ever. “Once the storm passed and we were able to asset the damage our volunteers begin the process of rebuilding and repairing the parish center.” On Tuesday, October 29, 2014 the one year anniversary of Super Storm Sandy Simon’s Soup Kitchen reopened its doors for another year. “It was very symbolic for us to reopen on the anniversary of the storm. As all of our volunteers were affected by the storm and we saw this opportunity as a way to move forward from the devastation,” Salemi stated.

Each serving night Simon’s Soup Kitchen opens promptly at 5:30pm and each serving is a balanced meal and quality of food that would be served to a guest at your own home: Each table is set with placemats, a basket of fresh breads and rolls and butter. The first course is a soup or chili - all homemade, of course, followed by a fresh salad with a choice of salad dressings. The main course consists of one or two entrees, a starch such as roasted or mashed potatoes, or a pasta dish, and one or two vegetables. Then there is a fresh dessert or frozen fruit salad served. In addition, the guests have unlimited beverages including iced tea, water, coffee, hot tea and hot chocolate.

Simon's Soup Kitchen also sends each child home with a breakfast meal, through a "Breakfast with Al" spinoff. Named after the late Al Scheidler, who was one of Simon's Soup Kitchen's original chefs, it provides a balanced breakfast for 50-75 children each week and has been recognized nation wide.

Simon's Soup Kitchen has brought members, their families and friends out of their houses in order to volunteer. Currently the volunteer lists have swelled to well over 200!